I’ve watched over a 100 Criterion films at this point.  That’s at least some form of expertise.  They have a thing for ræp.  They seem to love distinguished directors I cannot expend energy for (Kurosawa, Goddard.)  Benjamin Button is a Criterion film for some reason.  They and lots of people seem to love shitty asshole is shitty asshole and never learns a lesson (Quadrophenia, Everything Goes Wrong, Permanent Vacation.)

This isn’t Criterion.  It is arthouse as heck though.  I wish more of the arthouse films I’ve seen from Criterion were as weird and wonderful as this.  I saw this before I saw the anime.  It is abstract with fantastic costumes and even better architecture.  I don’t think the series even touches it.  If you want a wonderful and weird 80 minutes it is difficult to do better than this.  Now on to the Criterion.

I’ll start with a strong statement, most films before Star Wars are pretty boring.  Even the ones I like you have to be willing to accept a little boredom.   This film is one of the oldest on my list.  It’s also beautiful in Technicolor.  It has these giant incredible sets.  It has a bearable amount of ignorant racism and brown-washing.

When you look at the market place scenes you know immediately why George Lucas wanted to “fix” the crowd scenes in Star Wars.  They look incredibly empty compared to this film.  It also has the energy that Star Wars has running through it.  These is a world beyond what we’re shown.   Where a mildly obnoxious person would scream Hidden Fortress is the inspiration for Star Wars, The Thief of Bagdad has a better claim.  It’s a grand adventure with fantastic elements.  The Hidden Fortress is almost a bearable way to pass time.  Meanwhile I frequently forgot TToB was from 1940.

TWoaW is almost entirely people talking.  It is never boring for it though.  It’s a mystery.  It’s a proto-Matrix (here called the Simlacrun.)  Our lead Fred loves doing exaggerated motions.   It is Orange and Teal not because of post processing, but because of insane set design where every item in frame is orange or teal. 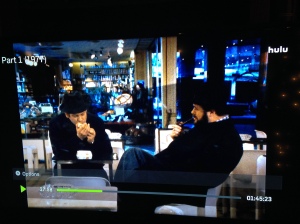 It’s a mystery about technology from 1973,  so you figure out everything almost immediately.  I was still engaged for it’s three hour running time.  It is both completely removed from our technology of today and yet gets most of it right.  I will probably not watch it again for years, but it now sits on my shelf as a great film I’m proud to display.  Fassbinder’s other films are mix of cool and comically gay.

I feel like talking about this film comes off as speaking in platitudes.  Unforunately that is the only way to speak about one the greatest things humanity has ever done.  This is footage and interviews with the men that went to the moon.  The footage shows in perfect clarity how cold and empty and vast space is.  I was shocked to have a very very real idea of how far the Earth and The Moon are.  In my own talks with people that work in space exploration the main reason we haven’t gone back is we have only learned since how many more ways it could have gone wrong.  That it went bad as little as it did was a miracle.   A film I want on my shelf just because of how important it is.

I’m pretty quick to dismiss something trying to weird.  The weirdness in Eraserhead is not in the outlandish, but in it’s humanity.  Henry Spencer is asked a lot in the name of being a good person.  He tries to escape this humanity to a stranger realm than he is in.  He’s then thrust back into a reality that is unbearable.  I had to keep pausing it because the film held me and I would forget to breathe.

Oh and let me clear the film is very strange.  It is always weird in service of itself.  In source of isolation.  I wished I could have seen it on a big screen, it must have been an incredible experience.  Seeing it on my TV was still stunning and horrible and brilliant.  I never want to watch it again.

It isn’t listed in the Criterion section, but it is on Hulu and does have a Criterion release.  There are a few films in the Criterion Collection that I watched and went “Boy this must have been great before the internet and pornography was easily available.”  You had to take what you can get.  So almost any film with a graphic sex scene I’m wary of it’s actual value as film and not just titillation under a different title.

There is sex almost immediately in this.  There is sex throughout.  The two male leads I would describe as “shitty assholes.”  There is an engaged to be married older woman they take on a journey to a beach that may not exist.  The film breaks through what sounds like a bunch of cliches to be a legitimate film.  It’s a road movie.  It’s a coming of age film.  It’s a film about seeking truth even when it hurts.  It does not shy away from sex on screen, and is stronger for it.

I’ve got a bone to pick with Oshima.  He frequently has the women in his film raped as something that happens.  He’s one of Criterion directors most guilty of this.  A frequently recommend Criterion film In The Realm of the Senses has actual child abuse in it (for me that crosses the line from art to bannable.)  The women in his films are frequently there to be used and discarded by the men. 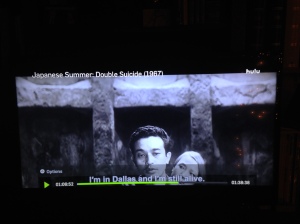 There are many Japanese films trying to wrestle with the malaise and cultural upheaval of the Japanese conciousness following World War II.  It will frequently have boys going on a rampage to rape women, for the women to confront them, and then for them to disregard this woman’s plight.  The woman/girl may have become pregnant.  The man goes “so?” and then the film will end with no resolution.  A statement on the Japanese Human Condition? maybe.  It’s bad entertainment for me.

Now what follows might sound jumbled, but I’m trying to keep these brief and I’m still working out why I like JSDS as much as I do.  In lots of other Japanese post-war films, the men are sociopaths and the women are hysterical traumatized wrecks.  In this film we’re in an abandoned Tokyo.  We have a man who wants to die but cannot.  A woman who desperately wants sex, but cannot find any suitors.  A boy who wants a gun to kill, but cannot find one.  They are conscripted into a gang war that may or may not exist.  They exist in a trapped repeating stage where they cannot leave.  In the films abstraction and disconnect from reality it gets closer to saying something about reality.

In post-war Japan where can anyone find satisfaction?  In the embrace of the defeated traditional values of Japan? In the new capitalist western ways? Japanese Summer Double Suicide tries to find the answers to those questions.

Look at the Hulu overview of Mr. Freedom I went there is no way this could be good.  It has to be filled with “comedy” and “commentary.”  I’m happy I was incredibly wrong.  I was going to give it five minutes.  I loved it immediately.  If you don’t, you probably shouldn’t keep watching.

The film is a freedom trip.  It is hilarious.  It is outrageous.  It takes the idea of White Christian American Patrotism to 11.  The film part collapses under it’s own weight eventually.  I can forgive it.  The Paris American Embassy as a department store scene is one of the best things I saw this year.

F for Fake is a strange film.  It is a cinematic essay.  It is the last film of Orson Welles.  It is a never fulfilled promise.  I finished it, and wished there were more like it.  It is the genesis and a messy incomplete idea.  It examines what is real and what is not, and if the truth is the same thing as a lie.  I want more things like it.

(also known as: Tears in the Lion’s Mane) Shinoda is my favorite Japanese new-wave director.  His women almost always have agency.  They are bound to the roles of women in society, but always exhibit strength and determination.  When he approaches a typical genre film, he injects the stereotypes with humanity.  Here we have a story about a dock workers’ strike.  We have a story about a Romeo and Juliet romance, where both are cursed and yet bound by their stations.

The opening has incredible sound design.  The sounds of the loading dock eventual explode with violence among the works and the yakuza controlling them.  Our yakuza thug protagonist is tormented by required masculinity .  The film twists the tie-in music single scene into a knife that just keeps twisting into your gut.  It’s an unknown classic where the only place to see it is on Hulu.

I love Hausu.  For years I heard of it as a psychedelic trip of a film.  That it was so crazy and weird.  That will make any one wary.

It lives up to it’s reputation.  It’s a horror film, and yet not explicitly scary.  It is doing something new and wonderful and strange in almost every shot.  It has an intense energy I have seen almost no where else.  I don’t even want to say anything about it, outside of how much you must see it.  You need to see it.  I will instead give an anecdote about it.

I watched with an internet stranger who was staying at my house for a bit.  About midway through the film, he pulled out his phone and bought it.  He needed a copy.  If there is a single film that justifies the Criterion line it is that Hausu has a wide release.  That everyone can now see it.  If you do not adore Hausu, I just have a great sadness for you.

With the list I tried to give an idea of the breath of Criterion films.  I also limited it to films I enjoyed all throughout.   Though I have my own biases I tried to limit the amount of Japanese films on the list for variety.  If I do a second list, Kill! will be one of the first on it.  There are also films I want to mention just for a single scene or idea.  Jedeux has awesome bird masks that you should totally check out.  I’m pretty luke-warm to silent film, but for pure physicality enjoyed the last scene of Safety Last! .  Red Desert is fantastic when it is just wondering around a blasted industrial Italian Hellscape, but eventually decides to have a plot.  Seventh Seal is mostly boring, and all the stunning imagery of it I just knew from pop culture. Not to be confused by JSDS, Double Suicide is a Shinoda film that uses the language of Japanese theater and cinema to tell an uninteresting story.

Let me know if you watch any of these films.  I would love to debate them with you.  Would you like to see 10 Criterion Hulu to avoid?