Blue Stinger is known for really getting the shaft.  It was a western launch title for the Dreamcast that every review ended with, “Wait for Resident Evil: Code Veronica.”  To be fair the western Dreamcast launch was a pile of quality titles and set something of an high standard.  Now there are 10+ years of distance between 9.9.99 and well, now.  Most people realize RE:CV is pretty awful, even against the Resident Evil template.  If you don’t, well I think it’s awful.

Now you can make poor decisions and buy Code Veronica as a digital download for your current gen-console, or you can find a copy of Blue Stinger cheap enough to fight the naysayers and your common sense in 2012 to buy it.

You end up with a game where you roundhouse-kick freak-monster-zombies in the head.  It’s a utopia world where everyone is dead and you can buy acid launchers and laser guns from vending machines (S’up Bioshock).  You achieve the money to do this by picking up exploding gold coins from just-murdered-by-you mutant corpse.  You also pick up bank cards from people that died before shit got really bad.  With alternate-reality game level logic, you can figure out their passcard and take their money.  Then you’re blasting giant enemy jeep-shelled hermit crabs with a bazooka and slicing those zombies with No More Heroes’ lightsaber.  Both of those feel completely more satisfying than any fight in NMH.

Everything in the game just is, and with all that time from its release we can accept that.  It never second guesses itself or asks you to look at any “big picture”.  So the vending machines carry ammo and weapons and hot dogs because you need them.  There’s blasting orchestra action movie music at all times.

Okay I’m being slightly obnoxious.  The game probably wants me to think its mindblowing, but that got lost somewhere between the American storyboards [1], the Japanese script writer [2]>, Japanese development team [3], and English Cutscenes [4].  That’s going to cause a lot of built in weirdness. 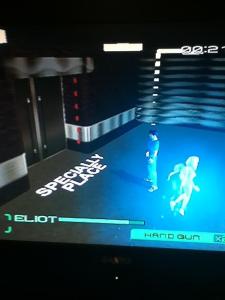 Space angel, I need some time alone. I’m going to my specially place.

It’s also the best Sega Christmas Game (post-NiGHTS) (pre-Shenmue).  It’s Christmas and before the game is over you’re going to have your codec girl fall in love with you.  You’re going to have to take a bath with your partner and then dress up as Santa to pass by the hygienic filter of a top secret research center on the top secret research island.

The climax has you climbing a tower’s rafters fighting a pre-Xbox 3D camera.  It would be horrible if it was just a tiny bit harder.  As is time creates a wonderful kusoge atmosphere to the moment.  I could mention 4-5 more excellent things that happen in the 12 hours of gameplay.  I’m not because at this point between my words and screenshots you’re probably looking on eBay.

[2] Shiya Nishigaki (whose lone other credit is Landstalker)

[3] Climax Graphics (Their other game is the doubly weird Illbreed)