God help me, I think I almost liked Final Fantasy XIII.  Almost. I finished it, which is more than I can say for any other Final Fantasy game with a number in the title.

This is a testament to two things:

It may seem like those are not related, or that the second is really personal revelation, but both are tied up in what this silly game is and how it works.

This game is where SquareSoft finally realized what they have been doing for all of these years, made a game about just doing that, and nobody wanted to be let in on what had been going on all along. In FF13, you are going to move forward, maybe divert for a second to grab a treasure chest, and then KEEP MOVING.

Why keep moving? Because it is all there is to do.

There are no towns, minimal side quests, nothing to stop you from moving forward.   Hell, your characters barely ever even stop to sleep, doing so maybe twice in the whole game. And let’s be honest: that is really all you ever did in Final Fantasy to begin with.  You moved forward.  Yeah, you might’ve distracted yourself enough to go fight Ultima Whatever at some point, or to finish trying to raise some pet, or max out your magic levels, but eventually you were just going to charge forward, fight the boss, and that was that.

In Final Fantasy XIII, you can’t even fully level your characters until the final boss is beaten. 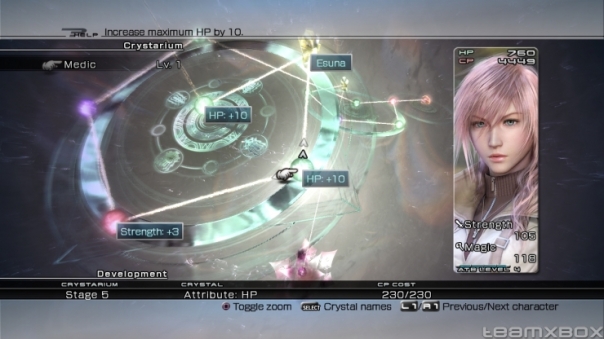 Nope, it doesn’t make much sense in the game either.

Why the hell would they do this?  Look, if you are Square, you’ve spent years and years making huge/long Final Fantasies, and have seen largely three groups of people play the games:

With FF13, Square said, “OK, we don’t like it when we get Quitters, so we will just make the game as light and quick moving as possible, hopefully barely giving anyone time to breathe before the end (in as much as a JRPG can do that), so that they won’t give up.”  This had the added benefit of making life easy for the Speeders, as the game makes speeding through it almost a necessity. And, in what proved to probably be the downfall of this game, Square said “Hey, let’s put all the stuff for the Completionists out of the way, make it for after the game.”

In their defense, I can understand the thought behind this.  They might have noticed how people like me, who should be Speeders, often ended up being Quitters when we got too bogged down in trying to be Completionists.  By separating out the content built for the Completionists, they hoped to cut down on the Quitters.

And they might have, maybe.  It could have worked, but it didn’t.  It largely failed, so bad that employees of Square have apologized for it. Thus the big question:

It’s not too hard, actually.  When you make the game so lightweight and simple to breeze through, the people who were formerly Quitters are a lot more likely to get through it, sure.  But they weren’t your biggest fans (they never finished your games to begin with), so what about the Speeders and Completionists?

The Speeders will feel like the game is being spoon-fed to them, like there is no challenge at all to it.  Previous FF games had a sorta tricky tightrope to walk.  Make the game just hard enough that even a Speeder is going to need to grind occasionally, maybe even do a sidequest or two, but then feel good when they overcome a boss and can keep plowing forward.  Make it too hard, and the Speeders become the Quitters quickly.  Make it too easy, and the Speeders start wanting to just become Completionists, because if you can easily beat everything, why wouldn’t you?  And if it is too easy, people (especially gamers/nerds, with their weird combination of liking-to-feel-smarter-than -everyone mixed with a persecution complex) aren’t going to feel like they are doing much at all now, really.

The problem for Square then became that, well, sorta by nature of their jobs, most major game reviewers are Speeders, and they didn’t like what they saw. This, of course, is not to lay the blame for FF13 at the reviewers’ feet, because duh.  But, when you design your game in a way that (if done poorly, as FF13 was)  kinda fucks over one of those three groups of players, you better not fuck over the ones who write all your reviews.

All that being said, the game is a mess for a lot of other reasons.  Combat is a mash up of basically every post-FF7 combat engine, and makes a whole lot of no-sense in terms of being some way that people might actually fight.  It works well enough as its own little strange set of rules and logic, and even gets kind of fun if you do it right, but it never clicks into “Oh hey, this is neat” really.

Making the combat feel weirder is how goddamn gorgeously rendered everything is.  The art design is all over the place (leaning more towards the negative, and most of the time looking like a collage of at least 3 different styles at once), but the engine it runs through sure makes it all look super pretty. 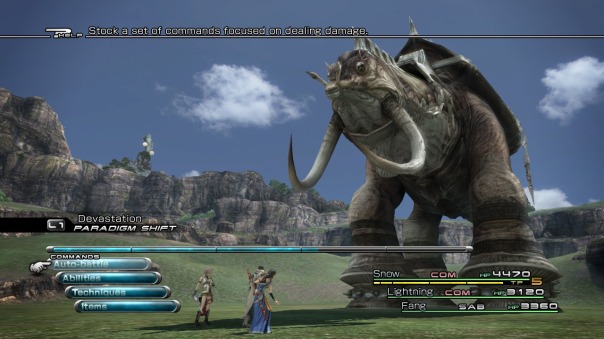 Yup, sure are some big monsters.

Remember the Uncanny Valley?  When robots/game characters get so close to looking human that we get creeped out by the tiniest little things being wrong?  FF13 suffers from a different kind of Uncanny Valley, in that everything looks so pretty and nearly real that when the game traps them in the conventions of 32-bit RPGs, it feels wrong.  Not terrifying like the robotic Uncanny Valley, but wrong…annoying?  Something not good.  I see these intricately detailed characters, and my brain starts to wonder why they have to stand around and wait to hit something instead of just swinging their swords/fists/guns/staff-things/whatever.

The story is a heaping helping of the only-slightly-more-than-usual FF bullshit, to be honest.  It really wants you to think there is something more important to it, and it really wants you to care about the main bad guy being so bad (but he’s just so boring, aside from being a Pope).  You won’t care about any of that, though, and that is OK.

The music is actually pretty good, if a bit scatter-brained.  The battle theme is largely dominated by a violin, and that might annoy me or not, depending on my mood at the time.  It is catchy as hell though.

In the end, I look at how much money and time went into this thing, and I am just amazed/dismayed by it all.  It’s obvious that a lot of people at Square cared a lot about this game, but at the same time nobody knew what to do with all that caring, so we got this.  It’s not surprising that the company is getting completely restructured right now.